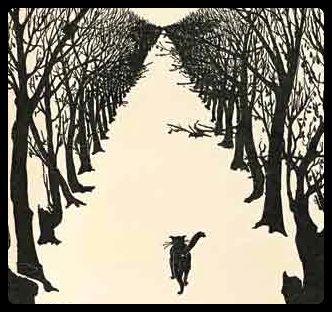 My wife and I own two cats. We adopted them as kittens from the Lost Dogs Home, North Melbourne, in 2009.

Mickey* is a black and white moggie. Jude is an all-black moggie with a strong splash of Burmese prince.

We wanted one cat, not two, but when the time came to extract Mickey from his cage, Jude leapt into view and rolled about with Mickey in a manner that was playful and affectionate. We couldn’t separate them.

I knew then that Jude was something special. I still joke that he planned the whole thing, hitching a ride into the future on the back of Mickey; I told him so as he was placed in my hands. He turned his head and met my gaze. I swear he winked.

Mickey is more dog than cat. He follows us from room to room and waits on the letterbox when we go out. Predictable and loveable, though not particularly distinguished, Mickey is our steadfast friend.

Jude is the cat that walks alone. That’s a borrowed image; one by Rudyard Kipling (1865-1936), the English short-story writer, poet and novelist.

Originally collected in Kipling’s Just So Stories in 1902, ‘The Cat that Walked by Himself’ is a tale about domestic life.

A man meets a woman. They move into a cave and set up home. A variety of wild animals are drawn to the warmth of the cave and are eventually tamed.

But not the cat. The cat refuses: “I am not a friend and I am not a servant. I am the Cat who walks by himself and all places are alike to me.”

There is, in the end, a compromise of sorts – the cat accepts a place by the fire and a drink of milk – but the cat is never wholly tamed: when night falls, he returns to the woods and walks alone.

When he was 10 months old, Jude was lost to us for three weeks. Day after day, we called for him. Night after night, we woke to the sound of possums on the roof and thought that Jude was back.

We placed ‘missing’ notices in letterboxes up and down our street. Coming on sunset, I stood in the backyard and called his name in plaintive tones, as a shepherd cries for a lamb that is lost.

A stranger found Jude almost 10 kilometres from home. Thin, flea-ridden and dehydrated, Jude was otherwise okay. I returned to the yard, opened a beer and thanked the universe. 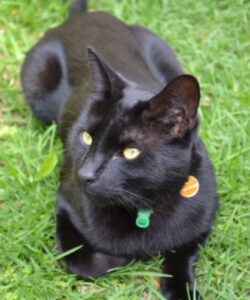 I’ve owned cats all my life. Jude (pictured) is, without question, the most intelligent of them all.

I write a lot. It is a strange and solitary business. There are moments in the process when I dive into the murky depths of my subconscious and struggle to resurface.

Jude appears, a divine interruption with unerring timing and an empathetic purr. He puts a paw upon my forearm or his head against my chest. He is there when it matters and nothing dissuades him. We are simpatico.

But Jude is the cat that walks alone – and I let him.

I am domesticated. I work in an office. I shave. I behave. I meet my obligations in ways that are respectful, respectable and thoroughly routine. I like that Jude remains aloof and semi-wild in his ways.

I tell him every morning how much he means to me. Then I let him out and watch him go, over the fence and into the world as if on urgent business.

In balance with the risk of loss, my respect and admiration.

* Our little mate, Mickey, passed away – swiftly, unexpectedly – in March 2018