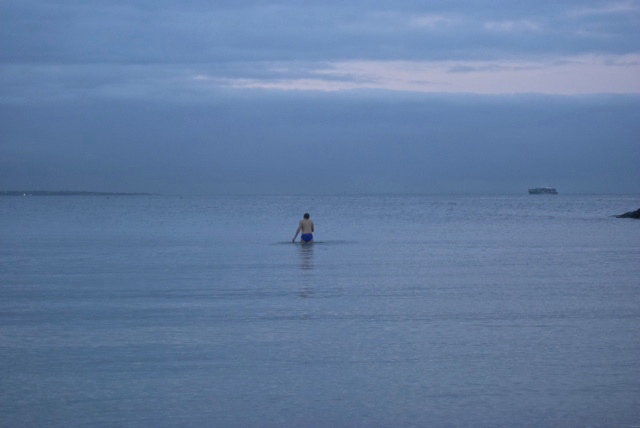 In any season. In any weather.

He swims. Almost every morning and usually before sunrise, he rides his bike to Williamstown beach and enters the water. In any season, in any weather – and never in a wetsuit – he wades into the shallows and sinks beneath the surface.

He is not an athlete. He is not in training. He doesn’t have to be here. Nor is he driven by some monastic discipline to rise at dawn and enter the frigid waters in search of higher meaning.

He is drawn by instinct (his word). As a river flows to the sea, so he returns each morning to the same small stretch of bay.

He is not a strong swimmer – he says as much himself – but he can write. Two years ago, he started a blog called ‘365 swims’ in which he recorded each week, for an entire year, notes on a year spent swimming.

The bulk of his daily dips took place at Williamstown. If he travelled that year, he sought out each day the nearest body of water. On a holiday to Vietnam, he swam his laps in the hotel pool.

The blog (which remains online) records his encounters at Williamstown with pelicans, stingrays, dolphins and a seal. It lists the people that he met and the friendships that he made. It also links to essays that he wrote for publication elsewhere. The blog resembles reportage; the essays reveal a poet.

He describes how it feels to swim in the dark. A streetlight casts its glow across the beach as he steps from the sand and into the bay. Beyond the light’s reach, he is swallowed in the water’s dark expanse. This is, he writes, “like swimming in ink.”

In another essay, he recalls an encounter on Williamstown beach with an Indigenous Australian – a story that ends one Australia Day with an image both serene and sublime.

The day after his final blog post, he swam again at Williamstown. In the last year alone, he has missed only a dozen swims.

He is Williamstown resident, Vin Maskell, a man with a strange, abiding love for a small stretch of salty water in Melbourne’s inner west.